The legendary mark named Ben tau Khong so K15
Ben tau Khong so K15 in Hai Phong - the original legendary cargo route on the sea which picked up weapons to support the southern battlefield in the past, was recognized by the Ministry of Culture - Sports and Tourism as a national historical monument. Nowadays, the legend is not only a charming landscape with green pine hills and immense waves but also a historic destination marking the heroic merits of Viet Nam.

Ben Nghieng owns the historical stories that touch in the soul

It is not a coincidence that we call Ben Nghieng, Ben Tau Khong So is a legendary, it was from the long-standing story of a golden historical age. In 1961, with the mission of providing arms, goods, food, military supplies for the troops and compatriots in the southern, Ministry of Defence established the 759th Army, after several days on the sea with full of difficulties and danger stalking, the first K15 barges arrived safely. Then, Viet Nam army founded the Ho Chi Minh Road on the sea - main circulation which is extremely important in the resistance war against American salvation. 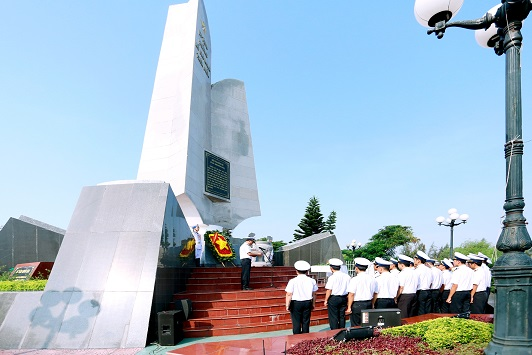 Throughout the war period, Ben Nghieng and no-number barges picked up thousands of tons of weapons, equipment from the North to the southern battlefield in time. During the trip, despite various difficult, military people bravely overcomed by courageous sacrifices to win many glorious victories.

A historical tour visit to Ben Tau Khong So

During the French colonial period, Ben Nghieng in Hai Phong used to be a big military port and witnessed the defeat of the French troops on board the retreating that ended the 80 years of Vietnam's invasion. Today, tourists who have the opportunity to go to Hai Phong, visit Green Valley at the foot of Nghinh Phong hill, will see monuments commemorate the historic Ho Chi Minh Road on the sea. In the recent years, Tau Khong So K15 Historical sites welcome thousands of visitors to come and become an important clue for eco-tourism, culture combined with religious beliefs Ben Nghieng - Hon Dau. Visiting Ben Nghieng, the guests will be surprised with the beauty there, quiet view of scenery and deeply look back about a distant previous time.

Hai Phong - Ben Tau Khong So K15 - a nice place lightly touches your soul. Viet Nam in peace, thanks to sacrifice of soldiers, we have fully warm living, we develop and we get happiness in life. We - Vietnamese - proudly invite you come there, to see these relics - witnesses of the hardships in fierce wartime, to better understand the true value of Viet Nam nation.

An Nhien Tea Meditation - The Deepest Note In Dalat Music

Have you heard the story of Cat Ba Monkey Island

Contact us immediately via hotline 1900.63.65.37 if you need assistance in booking or inquiries

You will not have to spend a lot of time, UHM Booking will support you the best in invoicing

UHM Booking will not add any surcharges, booking cost will always be clear and transparent

REGISTER TO DO NOT REMOVE THE LATEST ADVANTAGES!